Happy New Year! (for those of you using the Gregorian calendar).  It is one of life’s small cruelties that if you live in the Northern hemisphere, a grey, dark, cold time of year is also inexorably bound with resolutions to lose weight.  It’s entirely illogical: your body is bound up in layer upon chunky layer of clothing, and all you want to eat is comforting, stodgy carbs.  Far better to start a diet in March – its brighter, starts getting warmer, the prospect of salad is less likely to send you howling in despair from the room (unless that’s your modus operandi all year round, and you are not alone).  There’s a sense of approaching summer and the associated disrobing to act as an incentive to lose those extra layers you’ve acquired that you can’t hang in the wardrobe.  But right now its January. So, until those spring-like days, let us glory in girth, fellow book-lovers, and embrace loose baggy monsters.  This was Henry James’ term for those long Victorian novels, and they are perfect for this time of year.  If the holiday season has left you feeling like a baggy monster yourself, settle down with a huge book: you can wallow, a verb that suits your newly enormous body, in its vastness & lose yourself and the dark days that surround you; you can claim it’s a novella and make your body look smaller by comparison, optical illusion being so much easier than giving up all the fun stuff; and if you go for a paper version rather than an e-book the weight itself will act equally as well as a gym workout for your biceps (er, maybe). ‘Tis the season of the baggy monster!

I’ve gone for an obvious choice of baggy monster, George Eliot’s Middlemarch (published 1871-2. My copy: Penguin Classics 1965). Writing about Middlemarch is really difficult for me as it’s my favourite novel ever.  Ever.  And I find when things are that close to me, I can’t really explain them or talk about them objectively.  Lots of people can’t bear George Eliot and find her too intellectual and moralising.  Fine – I have no come back.  She’s both of those things.  But if you give Middlemarch a chance, the rewards can be huge.  The characterisations of the inhabitants of this middle-England town are fully drawn, as the length of the novel allows for such scope.  There is no reliance on stereotypes (Mr Dickens, take note), and even the unlikeable characters are understandable.  Eliot can be as witty and incisive as Jane Austen (“plain women he regarded as he did the other severe facts of life, to be faced with philosophy  and investigated by science”/ “she held it still more natural that Mr Lydgate should have fallen in love at first sight of her.  These things happened so often at balls, and why not by morning light, when the complexion  showed all the better for it?”), but for those of you who share my brother’s view that Austen is just “full of silly girls giggling behind fans” rest assured she’s also very different.  Virginia Woolf called Middlemarch “one of the few English novels written for grown up people”, by which I think she means that the story continues beyond marriage – the ultimate purpose of the plot is not achievement of a socially acceptable breeding arrangement but more a study of how people work, individually and within society.  There are big themes tackled: politics, education, professional fulfilment, religion…If that sounds dry, I promise there’s enough plot to keep you going, with the various stories of the ambitious Dr Lydgate, idealistic Dorothea, vacuous Rosamond, immature Fred Vincy… and now I’ll stop reducing Eliot’s great characters to a single adjective.  It’s also got Will Ladislaw in it, a Byronic hero who can easily equal Darcy in the “pouting air of discontent” love-god stakes, it’s just that the latter’s PR is so much more tenacious.  One of my tutors once told me he re-read Middlemarch regularly, and the final few paragraphs always made him cry (not that it’s  a tragic ending, just realistic).  I hope if you give Middlemarch a go, that it truly moves you.

In the course of writing the above paragraph I’ve realised that this post will turn into a baggy monster itself if I continue to attempt to capture these vast panoramic books in any sort of meaningful description.  So, like so many New Year’s resolutions, I’m going abandon my good intentions and instead write about a book that (in my copy) runs to a comparatively succinct 222 pages. Like Water for Chocolate by Laura Esquivel (published 1989. My copy: Black Swan, 1994), unlike the baggy monsters, keeps the plot fairly simple – Tita and Pedro love each other, tradition dictates they can’t be together, so he marries her sister to be around her.  You may not get a wallow in the depths of 800+ pages but it’s still a great choice for this time of year.    Firstly, its set in Mexico (and I should admit I read it in translation, if you can read it in the original Spanish so much the better) so if you can’t afford a warm holiday away from all the grey you can at least travel between the pages of a book.  Secondly, each chapter has a month title and an associated recipe and is hugely evocative around food: vicarious calories are delicious and also involve no cheating from your diet if you are insane enough to try and lose weight in January.  Amongst quail in rose petal sauce (March) and northern style chorizo (May) there is also a recipe for making matches (June), just in case you wondered. Finally, it is magic-realist in style: the female protagonist’s birth sees the kitchen awash in tears “When the uproar had subsided and the water had been dried up by the sun, Nacha swept up the residue the tears had left on the red stone floor. There was enough salt to fill a ten-pound sack – it was used for cooking and lasted a long time.” A bit of unreality – just what you need to help face the harsh realities of a northern winter.

So settle down with a great (in terms of both literary value and/or size) book and enough provisions to see you through (e.g. Kendal mint cake, or a family bar of chocolate.  With the latter you can always claim to be striking a blow against sociocultural constructions as a method of control (or something) by eating it all yourself.  This also works for family bags of crisps) and enjoy! I was planning to picture the books alongside some mojito cupcakes that I’d made for a friend’s birthday, but they went totally wrong – possibly due to the fact that my scales broke and so I guessed all the ingredients weights.  Hmmn, thinking about it, that’s almost definitely where my error lay. This succeeded in putting me in a cranky mood and incapable of thinking of another picture so instead here is a baggy monster who lives with me.  Proof, if proof were needed, that the world is a better place for having baggy monsters in it. 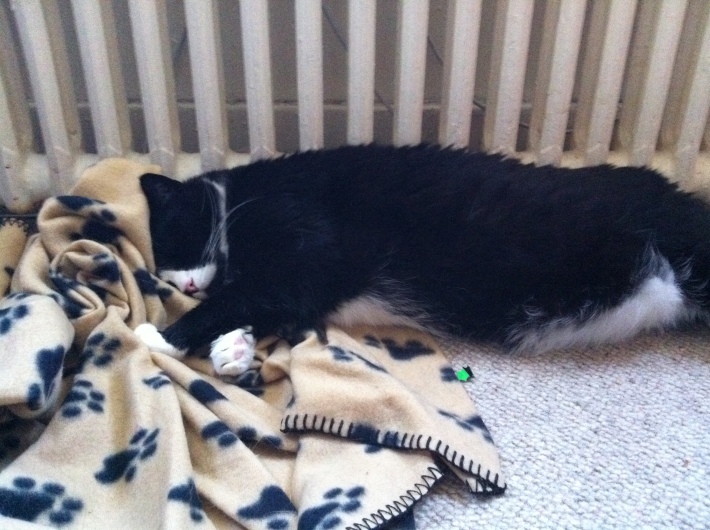 2 thoughts on ““There are two types of women in the world: those who like chocolate and complete bitches” (Dawn French)”