This weekend is the May Day Bank Holiday in UK.  For those of you who don’t have this celebratory tradition, it’s very simple.  A young woman is dressed in diaphanous clothing and flowers and carried through the village.  Traditionally she would have been a virgin.  Yes, in Britain we like celebrate the purity of young girls by parading them as some sort of Springtime woodland sex fairy.  Then we get children to dance with ribbons around a giant phallic symbol – nothing inappropriate there.  Then grown men strap bells to their ankles and don knickerbockers to dance with each other (women are banned from this so inherently masculine of pursuits) and whack each other with well, that would be phallic symbols again.  It’s not as weird as it sounds.  I did the mammoth cock ribbon dance (not its technical name) as a six year old and it didn’t do me any lasting damage – my therapist promises me it’s all reversible.  The traumas of May Day aside, 1st May is also International Workers Day, and so I’ve chosen a play that picks up on themes of May Day, and a novel about workers politics.

Firstly, a disclaimer. Jerusalem by Jez Butterworth is set on St George’s Day (23 April), not May Day.  But hey, what’s a week? I decided to go ahead with it anyway as it lends itself to May Day – ideas of ritual, tradition, Springtime and revelry run throughout.  Seeing Jerusalem was one of the most extraordinary experiences I’ve ever had in the theatre;  Mark Rylance in the lead role of Johnny ‘Rooster’ Byron put in a performance that was literally breathtaking – and that’s not a misuse of the word literally, at one point I realised I’d forgotten to breathe. I loved it so much that when a friend offered me the chance to interview Mark Rylance I turned it down – I couldn’t bear the thought that I might not like him off-stage and that I’d lose that performance. Even if you didn’t catch Jerusalem, which ran 3 times in London and also on Broadway, I still recommend the playtext.  Jez Butterworth is a highly rated playwright and his original voice and great skill mean it is an enjoyable read.

Rooster Byron lives in a mobile home in a wood.  The local council plan to evict him.  The local teenagers love him (and sort of despise him), as he supplies them with drugs and alcohol.  A local girl (dressed as a fairy) has disappeared and her psychotic step-father believes Rooster is involved, and plans to do him serious damage. Amongst these various pressures, Rooster remains resolutely upbeat and self-aggrandizing, with tall tales such as this one of his conception, whereby his philandering father is shot by his wife:

JOHNNY….The bullet passes clean through his scrotum…where it hits the number 87 tram to Andover. The bullet passes through two inches of rusty metal, clean through an elderly lady’s packed lunch and lodges in my sweet mother’s sixteen year old womb. Eight months, three weeks, six days later. Out pops him. Smiling. With a bullet clenched between his teeth.

GINGER. First of all. Babies don’t have teeth.

JOHNNY. All Byron boys are born with teeth. Thirty two chompers.  And hair on thems chest,…

Hopefully it’s apparent that Jerusalem is very funny.  Traditions surround the characters, such as the local Flintock Fair taking place, but are made resolutely current, such as when a Morris dancer arrives, talking about how his participation is due to a “Swindon-level decision”, and needing drugs to get him through it – hardly a bucolic idyll.  This take on England’s green and pleasant land lends the play a slightly surreal air, as Rooster’s outsider status gives him an askance view of the traditions, both wholly entangled (he was once the main attraction of Flintock Fair, performing daredevil stunts) and yet undermining them also.  The surreal quality exists in fairly straightforward exchanges:

JOHNNY. …Two weeks back, your brother Daffy comes round here, tries to buy three grams of whizz with a tortoise.

LEE. That weren’t his tortoise. That’s my sister’s tortoise.

LEE. He’s right. That tortoise pisses like a shirehorse.

But as well as humour, the surreal quality is unnerving, and you feel anything could happen.  When Byron claims he met a ninety foot giant “just off the A14 outside Upavon. About half a mile from the Little Chef. I’d been up for three days and nights playing canasta with these old ladies in a retirement home outside Wootton Bassett.” you don’t entirely disbelieve him.  What is real, what is fable, merge until you are not sure whether you watching a man in a mobile home in a wood in the West Country or a mythic being inextricably bound to the legends of the land. Maybe both. I can’t recommend Jerusalem highly enough.

Secondly, and I’ll make this brief, as my love for Jerusalem means I’ve wittered on too much already, The Ragged-Trousered Philanthropists by Robert Tressell.   Published in 1914, 3 years after the death of its author from tuberculosis, TRTP is a classic of socialist literature.  Frank Owen, described on the back cover of my copy of the novel as a “journeyman-prophet”, joins a group of workers who are renovating a house known as The Cave.  He encourages them to consider their role within a capitalist system and how they engage in their own economic suppression.  It’s a long novel, and highly polemical, but it’s also very readable and engaging.  In one of the most famous sequences in the book, Owen uses a loaf of bread to explain his reasoning. The bread is raw materials, cutlery is machinery, the cut pieces of bread the goods made.

‘You say that you are all in need of employment, and as I am the kind-hearted capitalist class I am going to invest all my money in various industries, so as to give you Plenty of Work. I shall pay each of you one pound per week, and a week’s work is -you must each produce three of these square blocks…..

‘These blocks represent the necessaries of life. You can’t live without some of these things, but as they belong to me, you will have to buy them from me: my price for these blocks is–one pound each.’

As the working classes were in need of the necessaries of life and as they could not eat, drink or wear the useless money, they were compelled to agree to the kind Capitalist’s terms. They each bought back and at once consumed one-third of the produce of their labour. The capitalist class also devoured two of the square blocks, and so the net result of the week’s work was that the kind capitalist had consumed two pounds worth of the things produced by the labour of the others, and reckoning the squares at their market value of one pound each, he had more than doubled his capital,…as for the working classes,… they were again in precisely the same condition as when they started work-they had nothing.”

This occurs in a chapter called ‘The Reign of Terror. The Great Money Trick’. As you may have guessed, TRTP is quite a bleak novel. Nothing changes and the workers are so indoctrinated in the system that Owen fails to raise their consciousness, turning his attention instead to George Barrington, a middle-class socialist who plans to overturn the system through elected representatives in the House of Commons (argue amongst yourselves as to how that’s working out). The Philanthropists of the title are the workers, doing so much for so little their labour must surely be an act of philanthropy towards their capitalist employers. This bitter irony captures the attitude of the novel towards the complicity of all society in a capitalist system, but although it is an angry book, TRTP doesn’t lose sight of its story amongst the politics.

Here are the books garlanded in May Day fashion: 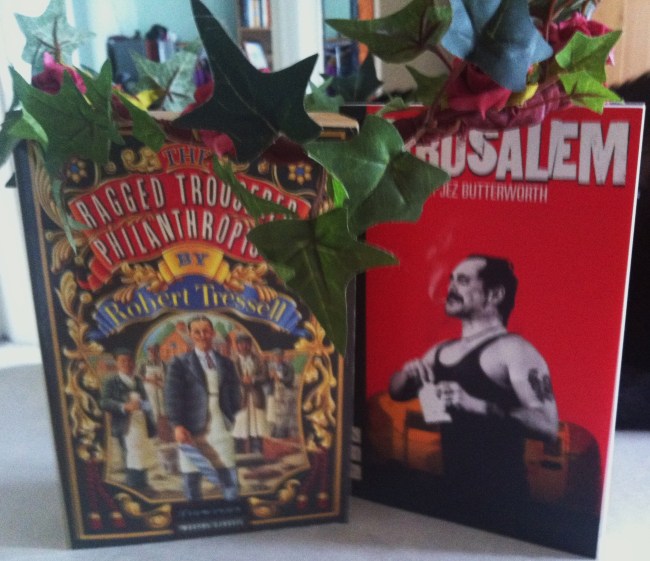 One thought on ““I like work: it fascinates me. I can sit and look at it for hours.” (Jerome K. Jerome)”