OK, so I’m a day late, but that’s practically on time compared to how late some of my other posts have been.  I’ve met my own low standards. 5 November is Guy Fawke’s Night in Britain, where we commemorate the foiling of an attempt to blow up the House of Lords and kill the king in 1605 by, er, setting fires and letting off fireworks. We used to burn effigy of the plotter Guy Fawkes (who was discovered with all the gunpowder) but that and kids asking you for “a penny for the guy” doesn’t seem to happen anymore – which is fine with me, it was a bit gruesome for my delicate sensibilities. 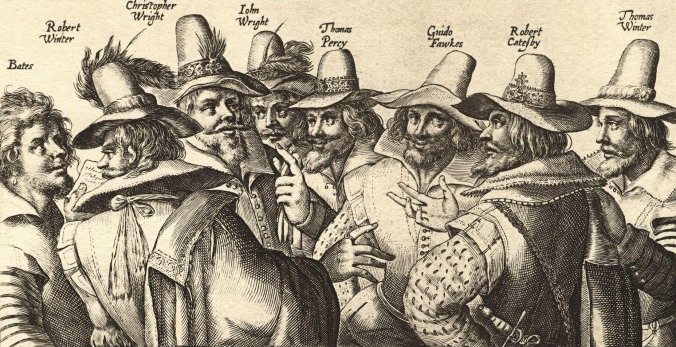 Anyway, the plotters were Catholic and wanted to kill the Protestant James I to put a Catholic monarch on the throne, so I thought this week I’d commemorate the plot through books rather than pyromania and look at work by Catholic writers.

Firstly, Ben Jonson, frenemy of Shakespeare, who actually had dinner with the plotters but somehow managed to duck suspicion and went on to become a writer for the court of James I. Jonson converted to Catholicism in 1598, while imprisoned for killing fellow playwright Gabriel Spencer in a duel (he’d previously been imprisoned for suspected sedition – he had quite the life). Jonson converted back to Anglicism in 1610, but the poem I’m going to look at sees him wrestling with his faith while still a Catholic.  Much of Jonson’s writing doesn’t carry well across the ages – he was heavily satirical and our knowledge of early seventeenth century politics and theatre-life has waned somewhat. However, this poem, written when his first son Benjamin died of plague aged just seven, captures such grief and pain as to be recogniseable today:

Farewell, thou child of my right hand, and joy;

My sin was too much hope of thee, lov’d boy.

Seven years tho’ wert lent to me, and I thee pay,

Exacted by thy fate, on the just day.

O, could I lose all father now! For why

Will man lament the state he should envy?

To have so soon ‘scap’d world’s and flesh’s rage,

And if no other misery, yet age?

For whose sake henceforth all his vows be such,

As what he loves may never like too much.

There’s a theory sometimes advanced that parents in this period were so used to losing their children that they met their deaths with equanimity.  Jonson’s poem shows how totally misguided this is.  He writes in heroic couplets, showing how deeply felt this is for him; the poem is epic in style, if not in length (the short length thereby reflecting his son’s short life).  Jonson finds himself tormented in faith rather than soothed by it; he knows he should be glad his son has “scap’d world’s and flesh’s rage” but can’t help feeling he has to pay for the sin of loving his son too much, and grieving the loss; he is left with the questions that form the middle of the poem, rather than answers.  The answer Jonson finds for himself means this is a poem that captures two tragedies – the death of the seven year old, and a father so consumed by pain that he wishes he had never known parenthood: “O, could I lose all father now!” determining to close off his feelings in future: “As what he loves may never like too much.” Jonson was egomaniacal about his work, so when he says “Rest in soft peace, and, ask’d, say, “Here doth lie/Ben Jonson his best piece of poetry.”” There is no higher acclaim he can give the seven year old. Truly heart-breaking.

Secondly, The Girls of Slender Means by Muriel Sparks (1963, Penguin, my edition 2013).  Like the titular girls, this novel is one of slender means, only 142 pages in my edition.  But although it is a short novel and very funny, it is not fluffy or disposable.  It tells the story of a group of women living in the boarding house the May of Teck Club, when “long ago in 1945 all the nice people in England were poor”.  Thus, the slender means, but they also have other slender means; the girls are obsessed with calories and being thin enough to attract a husband.  I would normally find this sort of behaviour intensely irritating, but it is testament to Spark’s writing that I didn’t – it’s 1945, options are limited for women, and they are using the means at their disposal to improve their lot.  They are pragmatic rather than vain and foolish.

“And they realized themselves in varying degrees, few people alive at the time were more delightful, more ingenious, more movingly lovely, and, as it might happen, more savage, than the girls of slender means.”

Selena is beautiful and promiscuous, trying to decide which of her lovers to marry; Joanna has abandoned romantic love for reciting poetry and giving elocution lessons, Jane is overweight (which she hates) and intellectual, and writes to famous authors in an attempt to get autographs for her strange employer.  I was quite fond of Dorothy:

“Dorothy could emit, at any hour of the day or night, a waterfall of debutante chatter, which rightly gave the impression that on any occasion between talking, eating and sleeping, she did not think, except in terms of those phrase-ripples of hers: ‘Filthy lunch.’ ‘The most gorgeous wedding.’ ‘He actually raped her, she was amazed.’ ‘Ghastly film.’ ‘I’m desperately well, thanks, how are you?’[…] It was some months before she was to put her head round Jane’s door and announce ‘Filthy luck. I’m preggers.  Come to the wedding.’”

As this passage shows, Sparks humour is acute, incisive, and packs a punch.  She captures dark circumstances and behaviour with such a light touch that is ultimately a lot more shocking than from within an unrelentingly bleak novel. We know that Nicholas Farringdon, drawn into the May of Teck circle, became a missionary and subsequently died in Haiti, but we don’t know what prompted the conversion.  As The Girls of Slender Means builds towards its denouement, Sparks doesn’t spell out the totality of the impact of the events in 1945.  The novel is more powerful for this; the women and Nicholas remain partly unknown: to themselves, to each other, and to the reader.