This is part of a series of occasional posts where I look at works from Le Monde’s 100 Books of the Century. Please see the separate page (link at the top) for the full list of books and an explanation of why I would do such a thing.

Now that I have some of my life back after a period where I was deranged enough to both work and study full-time (what was I thinking???? etc etc ad infinitum) I’ve decided I need to get back on track with my reading challenge, and I’m easing myself in with the slim novel The Big Sleep by Raymond Chandler.

The Big Sleep is the first of Chandler’s novels, and the first I’ve read. It’s a mark of how far his style and the hardboiled detectives he created have become assimilated into modern culture that I could hear Humphrey Bogart’s voice in my head reading every word:

Having finished the novel it’s a source of constant disappointment to me that I don’t have Bogie’s voice in my head narrating my daily life, although admittedly if he did turn up he’d probably leave out of utter boredom:

“I walked to the kitchen. A cat appeared from nowhere, making his disgust at the lack of crunchies in his bowl known.  I poured a cup of tea. The kettle needed descaling but I couldn’t be bothered. I was out of milk. I debated whether to drink it black or go to the shop. The tea in the cup was as dark as the night outside. As dark as my soul. I put on my coat, knowing the wind outside would be colder than the welcome awaiting my return if the cat bowl remained empty.”

Hmm, it’s not really working, is it? Let’s see it done properly, with tales of blackmail, murder, riches and glamour in Los Angeles, rather than domestic banalities in south London. Private eye Philip Marlowe is summoned by the affluent and moribund General Sternwood:

“His long narrow body was wrapped – in that heat – in a travelling rug and a faded red bathrobe. His thin clawlike hands were folded loosely on the rug, purple-nailed. A few locks of dry white hair clung to his scalp like wild flowers fighting for life on a bare rock […] The General spoke again, slowly, using his strength as carefully as an out-of-work showgirl uses her last pair of good stockings.”

This is the real joy of Chandler, his much-parodied use of simile, inventive and atmospheric. The images he uses accentuate the world-weary knowingness of Marlowe: “Dead men are heavier than broken hearts.” but I must confess that my sheltered existence meant I didn’t always understand all of them: “Her face fell apart like a bride’s pie crust”. Whaaat? Anyone?

As Marlowe investigates the blackmail case the General has employed him to uncover, he is drawn into the seedy underbelly (I think the phrase ‘seedy underbelly’ was probably coined to describe Chandler’s oeuvre) of Los Angeles – “It seemed like a nice neighbourhood to have bad habits in”– pornography, drugs, murder, and of course, sexy ladies at every turn:

“She got up slowly and swayed towards me in a tight black dress that didn’t reflect any light. She had long thighs and she walked with a certain something I hadn’t often seen in bookstores.”

The plot is convoluted, with everyone double-crossing everyone else and Marlowe at the centre of it all, trying to hang on to some sort moral compass:

“I got up feeling sluggish and tired and stood looking out of the windows, with a dark harsh taste of Sternwoods still in my mouth. I was as empty of life as a scarecrow’s pockets.”

He is compelling narrator, wise, brave and so much cooler than probably any of his readers (definitely me, as much as I wish I looked like this):

This is a novel to accept on its own terms – one where atmosphere and style top anything else.  Famously, director Howard Hawks queried a plot-hole with Chandler when he was filming The Big Sleep. Chandler confirmed he had no idea as to the answer.  But for escapist entertainment, a quick read with a confident narrative voice (Humphrey Bogart’s to be precise), The Big Sleep is a great example of the hard-boiled genre.

“The coffee shop smell from next door came in at the windows with the soot but failed to make me hungry. So I got out my office bottle and took the drink and let my self-respect ride its own race.” 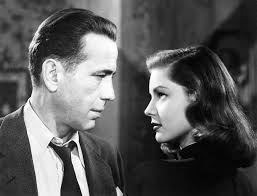