Reader, I’ve been abandoned by a man.  He just left, with no word of when he will return and how I miss him.  He’s gorgeous, he lives in a place of outstanding beauty, he shares my food obsession and always brings the sunshine with him. 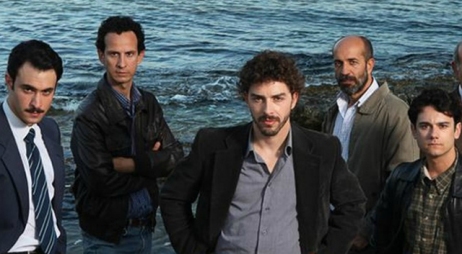 Always a sucker for the BBC4 Saturday night foreign detective dramas, I am deeply traumatised by the ending of Young Montalbano, whose Sicilian sunshine was no end of help in getting me through these grey February days.  The deli across the road sells great arancini but carb-loading on the Inspector’s favourite food is not quite compensating for my loss.

The BBC tried to make up for the series ending by screening an interview with the author of the Montalbano books, 88 year -old Andrea Camilleri. The man is charm personified so if you have a chance to watch this interview in the next few weeks I definitely recommend it.  In the opening scene Camilleri pays tribute to Spanish crime writer Manuel Vazquez Montalban, after whom he named his creation.  So off I trot to Barcelona in the company of Pepe Carvalho, Montalban’s private detective, in the hope that Spanish sunshine will help keep my vicarious vitamin D levels up. For this post I’ve paired it with another Spanish crime novel, The Invisible Guardian by Dolores Redondo (tr. Isabelle Kaufeler), which I was delighted to win in a giveaway on Elena’s lovely blog, Books and Reviews.  Do head over to B&R for Elena’s insightful review of The Invisible Guardian and interview with the author. These two books are also one more stop on my Around the World in 80 Books Reading Challenge, hosted by Hard Book Habit.

In Tattoo (tr. Nick Caistor), Pepe Carvalho “an ex-cop, an ex-Marxist and a gourmet” is hired by a local hairdresser to identify a body that has been pulled out of the sea, badly disfigured but with the legend “Born to Raise Hell in Hell” tattooed on his back.  It’s a shame Montalban has died, because a cross-over novel penned by him and Camilleri would have been something to behold; their two protagonists are so similar that they’d either become bosom buddies or detest each other on sight:

“Strolling aimlessly around the market was one of the few ways that this tall, dark-haired man in his thirties, who somehow contrived to look slightly dishevelled despite wearing expensive suits from tailors in the smartest part of town, allowed himself some spiritual relaxation whenever he left Charo’s neighbourhood and headed back to his lair on the slopes of the mountain overlooking Barcelona.”

Carvalho’s investigation takes him from Barcelona to Amsterdam where he becomes embroiled in the drugs trade, gets badly beaten, and engages sex workers as informers. He is tough and cynical and in that sense very much in the line of familiar hard-boiled detectives, but Montalban has self-referential fun with this:

“Carvalho did not want to seem too smart, or behave like a Chandler character facing a stupid, brutal LAPD cop.”

This is Tattoo’s main appeal for me – a European sensibility brought to a Chandler-esque tale. I wasn’t keen on the violence towards women, particularly when one of them sleeps with Carvalho straight afterwards, but Montalban redeems himself slightly by having sex worker who is strong, independent, and not punished by rape and/or being killed off, which I didn’t entirely expect for a novel written in the 1970s. The tale is told with dry humour through some remarkable images: “the man had the mental recall of a great masturbator”. Quite.

This is the second Carvalho mystery and I didn’t feel I had to have read the first. Apparently the series becomes more politically engaged as it goes along, the ‘ex-Marxist’ element of the detective satirising Spanish politics, which is an interesting turn to take – for this reason I definitely plan on spending more time in Pepe’s company. 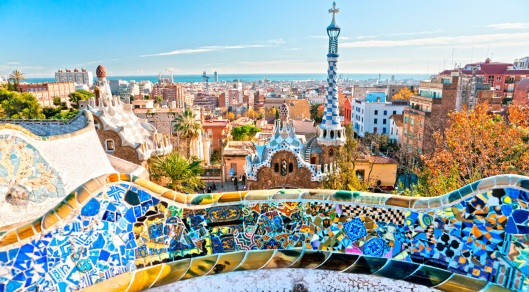 Barcelona – I do love me some Gaudi

From Barcelona to Basque country, and The Invisible Guardian by Dolores Redondo. I am not a big reader of contemporary crime fiction, but I was intrigued by Elena’s review, which described how the Basque setting of Elizondo brought its own unique atmosphere to the novel:

“The Baztan forest is enchanting, with a serene, ancient beauty that effortlessly brings out people’s most human side; a childlike part of them that believes in fairies with webbed ducks’ feet that used to live in the forest… Amaia felt the presence of such beings in that forest so tangibly that it seemed easy to believe in a druid culture, the power of trees over men, and to imagine a time when communion between magical beings and humans was a religion throughout the valley” 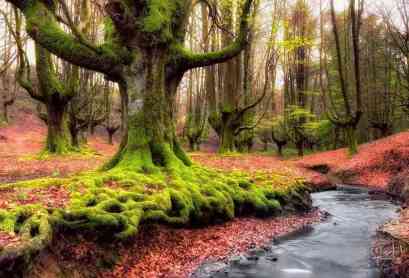 Amaia is Inspector Salazar, deployed from Pamplona back to her home town to investigate a series of murders: young girls, strangled and laid out ritualistically. While the details of the dead are disturbing, I didn’t feel it was overly gory, and certainly not voyeuristically gruesome. We are never allowed to forget that these are young people, on the cusp of womanhood, robbed of their lives:

“the girl’s small, pale face with tiny drops of water still trapped in her eyelashes acted like clamorous cries to which she could not help but respond”

As Amaia investigates the murders she also has to face the ghosts of her past, and although she is deeply troubled, she’s not the stereotype of a tortured, isolated, renegade detective. She is happily married (although the relationship is under strain), she has family around her including a loving, strong aunt,  and she follows procedure.

“This was her hometown, a place in which she had lived for most of her life. It was part of her, like a genetic trace, it was where she returned to in her dreams when she wasn’t dreaming about the dead bodies, assailants, killers and suicides which mingled obscenely in her nightmares”

What I thought Redondo did exceptionally well was mixing a recogniseable contemporary reality with the old religion, mysticism and mythology of the past; the investigation progresses through a combination of procedural police work with intuition and precognition. This never jars and adds to the eerie, unnerving quality evoked by the Baztan forest without losing the tension of the investigation. It’s an extraordinary achievement. My one reservation is that the dialogue occasionally felt a bit clunky, but I suspect this may be a translation issue as I imagine trying to capture natural speech is extremely difficult. The Invisible Guardian is the first in a trilogy and I’m really looking forward to the next two installments.

To end, a glimpse of where BBC4 is taking me after Sicily. I haven’t watched last week’s episodes yet, and although it looks great, I think I’ll need to get my vicarious sunshine elsewhere:

17 thoughts on ““The inspector sat down on a stair, fired up a cigarette, and entered an immobility contest with a lizard.” (The Snack Thief, Andrea Camilleri)”