Caroline Aherne, actor and writer, creator of the comedic brilliance that was The Royle Family, died on Saturday.  And so 2016 continues as forerunner for the most rubbish year in recent memory. If the political situation and the death of a yet another great person this year is getting you down, I would prescribe YouTubing  Caroline’s career for some solace.

If you enjoy someone’s work, there is a consolation that they leave this behind when they are no longer around, so I thought I would look at two novelists last works which were published in their lifetimes.

Firstly, The Old Man and the Sea by Ernest Hemingway (1952), fulfilling the sea-based tale requirement of the Around the World in 80 Books reading challenge hosted by Hard Book Habit. And so my inexplicable love affair with Hemingway continues. I’ve written before about how much I want to dislike Hemingway, but I just adore his writing. Like all great love affairs, we are wholly incompatible, and yet I find myself drawn back time and time again, whilst knowing I cannot change him. The Old Man and the Sea did not succeed in breaking the spell. 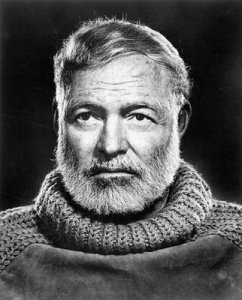 The titular old man is Santiago, a Cuban fisherman who sails in the Gulf Stream and has gone 84 days without catching a fish.

“Everything about him was old except his eyes and they were the same colour as the sea and were cheerful and undefeated.”

Manolin, a young boy, has known the fisherman his whole life and loves him, and it is through his eyes that we first see Santiago:

“His shirt had been patched so many times that it was like the sail and the patches were faded to many different shades by the sun. The old man’s head was very old though and with his eyes closed there was no life in his face. The newspaper lay across his knees and the weight of his arm held it there in the evening breeze. He was barefooted.

The boy left him there and when he came back the old man was still asleep.

“Wake up old man,” the boy said and put his hand on one of the old man’s knees.

The old man opened his eyes and for a moment he was coming back from a long way away. Then he smiled.”

They head out to fish separately – Manolin is banned from accompanying Santiago due to his salao bad luck – and what follows is the story of Santiago’s lone sea journey. The descriptions have Hemingway’s trademark pinpoint accuracy but this exists alongside metaphorical beauty, which absolutely captures the water and the isolation of the sailor.

“The old man knew he was going far out and he left the smell of the land behind and rowed out into the clean early morning smell of the ocean. He saw the phosphorescence of the Gulf weed in the water as he rowed over the part of the ocean that the fishermen called the great well because there was a sudden deep of seven hundred fathoms where all sorts of fish congregated because of the swirl the current made against the steep walls of the floor of the ocean.”

“The sea was very dark and the light made prisms in the water. The myriad flecks of the plankton were annulled now by the high sun and it was only the great deep prisms in the blue water that the old man saw now with his lines going straight down into the water that was a mile deep.”

The fisherman succeeds in hooking a “great fish” but is unable to bring it aboard, and so is towed by the marlin farther and farther out to sea, as he waits for the fish to die. I can’t say much more as it is only novella length (you can read the full text here) so I’ll just say that The Old Man and the Sea is extraordinary: fable, allegory, elegy, a meditative page-turner which I found truly moving.

“He looked across the sea and knew how alone he was now. But he could see the prisms in the deep dark water and the line stretching ahead and the strange undulation of the calm. The clouds were building up now for the trade wind and he looked ahead and saw a flight of wild ducks etching themselves against the sky over the water, then blurring, then etching again and he knew no man was ever alone on the sea.”

Secondly, Mrs Palfrey at the Claremont by Elizabeth Taylor. 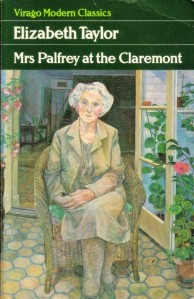 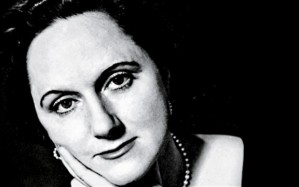 Elizabeth Taylor, the one who didn’t keep marrying Richard Burton

Following the death of her beloved husband, Mrs Palfrey moves to the Claremont Hotel on the Cromwell Road “The porch pillars had been recently painted; there were spotted laurels in the window boxes; clean curtains – a front of emphatic respectability.” to see out her days.

“She was a tall woman with big bones and a noble face, dark eyebrows and a neatly folded jowl. She would have made a distinguished-looking man and, sometimes, wearing evening dress, looked like some famous general in drag.”

Mrs Palfrey and her fellow permanent residents at the hotel are desperately trying to avoid a nursing home and rub along together in a mix of boredom, gossip and barely suppressed disdain. Although Taylor is interested in aging and how to find meaning in a world that considers you finished, this isn’t a depressing novel , but rather a gentle comedy with a melancholic tinge.

“Soon, there was a soft, slapping sound as Mr Osmond shuffled a pack of cards for a game of patience: against this, the knitting sounds, and sighs, and stomach gurglings (quickly coughed over).

‘Well, another Sunday nearly gone,’ Mrs Post said quickly, to cover a little fart. She had presence of mind.”

Mrs Palfrey is a resolute soul, who refuses to feel sorry for herself. Part of the generation who lived through both World Wars, she gets on with things.

“She felt a determination about the lilac trees. They were to be a part of her rules, her code of behaviour. Be independent; never give way to melancholy; never touch capital. And she had abided by the rules.”

On a walk around London, she has a fall and is rescued by a young man, Ludo. He is shaggy-haired, scruffily dressed, good-looking and a wannabe writer. They end up forming an unlikely friendship and the nuances, contradictions, tensions and tenderness between the two are beautifully observed. Taylor is a wonderful writer: sharp, observant, funny and real. She put me in mind of Barbara Pym, and the blurb on the back of my copy of this novel compares her to Jane Austen.  Certainly if you like those, you’ll find a lot to love here.

“She could glimpse bed-sitting rooms – like Ludo’s some of them – where once cooks had attended ranges, rattling dampers, hooking off hot-plates, skimming stock pots, while listening to housemaids’ gossip bought from above stairs. Mrs Palfrey went slowly by, imagining those days, which were almost clearer to her than this present structure of honeycomb housing and the isolation of each cell, because they were the days that belonged to her being young, and so were the clearest of all to her.”

To end, if you think Ernest Hemingway and Elizabeth Taylor are an unlikely pairing, here’s a heavy metal band and an orchestra performing a song named after a Hemingway novel:

21 thoughts on ““But what first, Debbie, attracted you to the millionaire Paul Daniels?” (Mrs Merton/Caroline Aherne)”