Although I’ve since read and blogged about The Post Office Girl, this was the first Stefan Zweig I’d read and at first I wondered why everyone rated him so highly as a writer. Then I realised what he was doing in Journey into the Past was immensely clever.

It tells the story of a love affair between a student, Ludwig, and the wife of his employer, who is not named. The story begins with them on a train in the 1920s, and with Ludwig’s thoughts travelling back into the past to remember how they first met before the First World War separated them.

At first, I thought the description of the affair overblown and naïve.

“From that first meeting he had loved this woman, but passionately as his feeling surged over him, following him even into his dreams, the crucial factor that would shake him to the core was still lacking – his conscious realisation that what, denying his true feelings, he still called admiration, respect and devotion was in fact love  – a burning, unbounded, absolute and passionate love.”

But as the story developed – they admit their love but it remains unconsummated, he goes abroad and then war breaks out, separating them for longer than they ever anticipated – it dawned on me that this style choice was entirely deliberate and conscious.  What Zweig shows us is a world before modern technological warfare, a world that was brutally torn apart. These naïve young lovers are part of a society, a life, that was utterly destroyed.

So although we know they are reunited, it is not with the same youthful self-obsession or indulgent love that they had previously.

“‘Everything is just as it used to be, don’t you think?’ she began, determined to say something innocent and casual, although her voice was husky and shook a little.  However he did not echo her friendly, conversational tone, but gritted his teeth.

‘Oh yes, everything.’ Sudden inner rage forced the words abruptly and bitterly out of his mouth. ‘Everything is as it used to be except for us, except for us!’”

Journey into the Past is not a depressing book despite portraying losses that are glimpsed and barely articulated. It is about the impact of international conflict on the lives of individuals in the smallest, most profound ways. Zweig questions whether those loses can be overcome, and I still don’t know what I think.

I feel foolish for my initial impression of this novella: I hadn’t realised I was in the hands of a master. 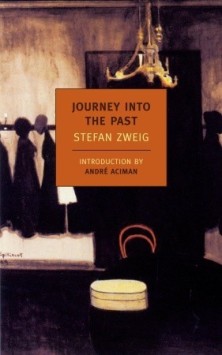