Today is Elizabeth Taylor Day in Jane at Beyond Eden Rock’s Birthday Book of Underappreciated Lady Authors, which gave me a chance to read the last two novels I had of hers remaining in the TBR (thankfully I’ve not yet read all her work – roll on the end of the book-buying ban…). 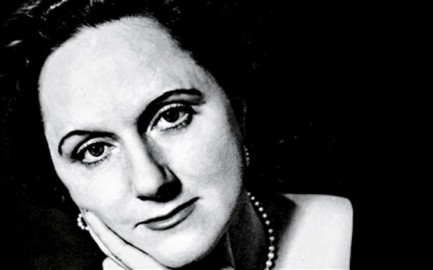 Firstly, The Sleeping Beauty (1953), which tells the story of Vinny, a man who is a reliable shoulder to cry on for all his female friends.

“It was his business to be loved – a mission created afresh with everyone he met – and he was always conscious of another’s coldness.”

When Isabella’s husband dies, he is down to visit her at her coastal home like a shot.

“ ‘You are welcome to follow me to the ends of the earth’ Vinny seemed to be assuring people when he was introduced.”

Vinny should be seen as a model of compassion, but instead Taylor’s sharp eye shows him as vain and very much driven by his own needs. Isabella’s son Laurence, courting a young nursemaid staying at a local B&B, doesn’t take to him as he thinks he has plans to marry Isabella. The thought crosses Isabella’s mind too, and she finds comfort in planning how she will turn him down. What neither of them know is that firstly, Vinny is already married (though separated) from his wife Rita “[who] had, in fact, a great distaste for the truth and was forever tidying it up or turning her back on it.” and secondly, that Vinny has fallen in love at first sight with Emily, who he saw on the beach.

“When they had gone from view, he turned back to the room, and found it dark now, and very small.”

Emily is a blank canvas in many ways, perfect for Vinny’s romantic sensibility.

“Nearing fifty, Vinny felt more than ever the sweet disappointments only a romantic knows….the imperfectly remembered and the half-anticipated. Past and future to him were the realities; the present dull, meaningless.”

Emily has been in a car accident and her heart was broken when her lover subsequently dumped her, unable to cope with her changed appearance. She is still beautiful, but in a strange way, as Vinny’s mother observes:

“anything passive she abhorred, and Emily’s dead-white skin, her lack of expression, about which Vinny had found no words to forewarn her, no heart to explain or discuss, annoyed and repelled her. She could sense Emily’s life drifting by in an incurious desuetude.”

The Sleeping Beauty has a determinedly unromantic male lead, and a beauty whose awakening is for his benefit not hers. Taylor shows how we attempt to construct our lives around our desires and how that can cause pain rather than delight for ourselves and those we love. She is very funny (such as Isabella and her friend Evalie being avid racing gamblers, hiding this from her son, who is also betting and hiding it from his mother) but overall the tale is unsettling. If the romance will result in happily-ever-after for any of those concerned is left for the reader to decide.

“ ‘Oh, I am nothing without you,’ she said. ‘I should not know what to be. I feel as if you had invented me. I watch you inventing me, week after week.’” 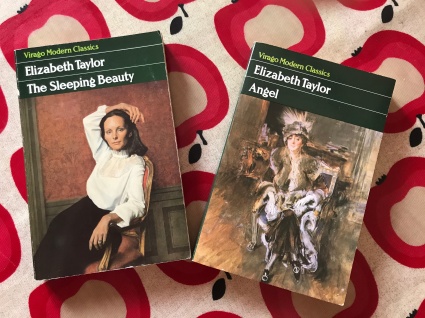 Secondly, Angel (1957) a hilarious portrait of a writer supposedly based on the romantic novelist Marie Corelli. Angelica Deverell decides before she’s even left school that she’s going to be a romantic novelist. This is despite not liking love, or novels:

“Until now she had thought of love with bleak distaste. She wanted to dominate the world, not one person.”

“She had never cared much for books, because they did not seem to be about her”

Angel is one of the most rampant egotists ever committed to paper. She is a terrible writer without life experience, knowledge or taste to draw on, and yet she is hugely popular – her readers don’t care about her error-ridden purple prose. Her fame insulates her from the world and so she is able to continue her entirely ego-driven existence, never bothering to look beyond herself for anything. She is physically astigmatic but psychologically myopic to the point of blindness.

Maybe I’m lacking compassion but I didn’t find Angel remotely sympathetic. She is appalling. The pathos comes through her mother: baffled by her daughter, and yanked from her home by Angel’s material wealth. I found this passage heart-rending:

“At a time of her life when she needed the security of familiar things, these were put beyond her reach. It seemed to her she had wasted her years acquiring a skill which in the end was to be of no use to her: her weather-eye for a good drying day; her careful ear for judging the gentle singing sound of meat roasting in the oven; her touch for the freshness of bacon; and how, by smelling a cake, she could tell if it were baked: arts, which had taken so long to perfect, now fell into disuse. She would never again, she grieved, gather up a great fragrant line of washing in her arms to carry indoors.”

Amazingly, Angel does have people who care about her, repugnant as she is. Theo, her publisher, takes a paternalistic attitude and worries she will never get what she wants:

“Love, which calls for compliance, resilience, lavishness, would be a shock to her spirit, and upset to the rhythm of her days. She would never achieve it, he was sure. For all the love in her books, it would be beyond her in life.”

Nora is a devoted friend and lives with Angel for the majority of their lives, even during Angel’s marriage to Nora’s feckless brother Esme:

“ ‘I read one of your books.’ he said, sounding as if it were rather a surprising thing to do.

She blinked, jolted by what he had said. She always supposed that everyone had read all of her books and had them nearly by heart, that they thought about them endlessly and waited impatiently for the next one to appear.”

Her marriage is held together through Esme’s lies and Angel’s unrelenting capacity for self-delusion, despite the fact she doesn’t enjoy the honeymoon:

“Greece was especially disappointing. It was nothing like her novels.”

Angel is an astonishing character study and the story of one writer’s life. What is most astounding is that the grotesque Angel is apparently not too far from real life; apart from the fact that she was probably gay and more interested in the esoteric, Marie Corelli seems to have been very much like Angel. Certainly like Corelli, Angel refuses to acknowledge her waning star following the First World War when people don’t want overwritten romances anymore.

Angel never has an epiphany, she remains resolutely vain, deluded and solipsistic until the end. The novel is a comi-tragedy, carefully balancing absurd excess with sharp-eyed psychological insight.

“She went to the Royal Garden Party in violet satin and ostrich feathers with purple-dyed chinchilla on her shoulders; amethysts encrusted her corsage and mauve orchids were sewn all over her skirt where they quickly wilted. Glances of astonishment she interpreted as admiration.”

“Arrogant and absurd she had been and remained; she had warded off friendship and stayed lonely and made such fortifications within her own mind that truth could not pierce it”

“I am frightened, she suddenly thought. But there was nothing to be frightened of; not even poverty now. I have come such a long way, she told herself, and done all that I wanted and there is nothing to fear.”

In life and in fiction, I like people who walk to the beat of their own drum. Angel certainly does this. I think the reason I couldn’t stand her is because she is so utterly self-focussed. She has zero interest in other people or in the world. Taylor is such a skilled writer that her horrible main character does not detract from the joy of this novel. The comedy is gentle; although we laugh at Angel it is in disbelief rather than cruelty. There is also enough reality and pathos through the characters that surround her to ground the novel away from Angel’s delusions.

Elizabeth Taylor is such a wonderful writer. Any novel of hers is an absolute masterclass in astute, humane, witty style. The fact that she is an Underappreciated Lady Author is an absolute travesty.

To end, I saw a documentary recently about female singers and Annie Lennox was part of it, looking bloomin’ amazing in every shot. Here she is singing about an angel: