Today is Rumer Godden Day in Jane at Beyond Eden Rock’s Birthday Book of Underappreciated Lady Authors. I’m so grateful that this prompted me to read the two by Godden I had in the TBR, as she’s quickly become a new favourite.  Godden is such an accomplished writer; her books are so readable and her use of language is stunning.

Firstly, Kingfishers Catch Fire (1953), which I started reading with some trepidation. I expected a novel about a 1950s English woman living in India to be filled with white entitlement and comic/exoticised portraits of the locals. Thankfully, Godden is far too sophisticated an author to do anything so crass, and the comic portrait is resolutely reserved for the clueless but well-meaning white foreigner, Sophie.

“To the Pundit, Sophie was precisely like any other European or American, only more friendly; the friendliness alarmed him. ‘These people are poor and simple…’ he began, but Sophie interrupted him.

‘We shall be poor and simple too,’ she said with shining eyes.

‘But madam, the peasants are rapacious…’

To that Sophie would not listen. Like many people there were some words about which she was sentimental; one of these was ‘peasant’. ‘Peasants are simple and honest and kindly and quiet,’ she said. ‘They don’t want what they don’t possess. They have the wisdom to stay simple. They don’t want to change.’”

This idealistic young woman crashes into Kashmir with her two children, estranged from her husband and determined to establish a life for herself. Yet the portrait of Sophie is a subtle one: she is oblivious to the needs of her children and to the cultural differences between her and her neighbours, but somehow not arrogant, just hopelessly naïve.

“Teresa could not count how many times they had moved, but each time the small ballast of hopes and plans they had collected was thrown overboard and everyone they had known was left behind.

Moo did not care. Like a little seed that is blown and can grow anywhere, on a rocky ledge, in a crack of earth, he lived a contained contented small life of his own no matter where he went. To Moo it did not matter but Teresa had roots, they were tender, soft and trailing…”

Poor Teresa. She is sensible and understands so much more than her adult parent. She also cares for Moo, who is probably on the autistic spectrum and in his own world.

In describing how Sophie and her children live in Kashmir, Godden adopts an interesting approach by having the story interjected with later reflections from Sophie and her family. So the narrative will be interrupted with comments like “‘But you were not qualified to teach Urdu,’ said Toby afterwards.” It’s not a technique I’ve seen before and it doesn’t jar as much as I would expect. The effect is to temper Sophie’s idealism and blind actions. It works to offset what sceptical readers (ie me) might be thinking: ‘but that’s just ridiculous, she’ll never make that work…’ etc. It keeps the story grounded even when the main protagonist ricochets from one ill-conceived action to the next.

Godden wrote Kingfishers Catch Fire based on her own experiences of India and her love of the land is obvious:

“There were no ceilings, only cross beams stuffed with dried furze as in most Kashmiri peasant houses. There was no glass in the windows, only hanging window shutters, no water system of course, no lighting, but it was a rarely beautiful little house. In summer it was hung with vines and honeysuckle and white-scented roses, and all around it were flowering trees….Above it all the mountain reared its head while below, lay the lake and its reflections and, far, the horizon of snow peaks.”

The plot is a deceptive one. I was enjoying what I thought was comic novel about the escapades of a fairly clueless woman; then suddenly things took a very dark turn and I found myself racing towards the end, desperate to know what happened and for things to work out well.

I loved the ending. This pithy comment on stealthy imperialism summed it up for me:

“The missionaries worked for the people but did not respect them. For all their love and zeal the wanted to bend them, bend them out of their own truth”

The message I took from Kingfishers Catch Fire was one of resolutely sticking to your own truth, whilst acknowledging and respecting other people’s. I just loved it. 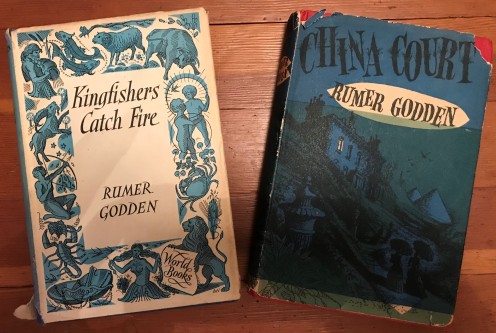 Secondly, China Court (1961). This is another story of a dilapidated house and the woman who loves it, but otherwise very different to Kingfishers Catch Fire. The titular pile is the Victorian home of five generations of the Quin family set in the Cornish moors and built on the proceeds of china clay works.

“When one of the…rose bowls or vases is rung it gives off a sound, clear, like a chime, the ring of true porcelain, so China Court gives off the ring of a house, a true home.”

The story begins with the death of Mrs Quin, the matriarch who has resolutely stayed in China Court against all her family’s wishes (except her granddaughter) and looks at what happens after her death as her family besiege the house for the reading of the will.

The story moves back and forth across the generations. There is no indication when this will happen; scenes cut between the various family members, all in present tense. Again, this stylistic experiment doesn’t jar nearly as much as I would expect. Instead it captures a sense of the house holding all the members of the family at any one time, the echoes of their steps and their voices all layered upon one another.

“Homes must know a certain loneliness because all humans are lonely, shut away from one another, even in the act of talking, of loving. Adza cannot follow Eustace in his business deals and preoccupations as she cannot follow Mcleod the Second or Anne or Jared – no one can follow Eliza. Mr King Lee, kissing Damaris, has no inkling of the desolation he has brought her, just as Groundsel only half guesses Minna’s; Jared hides himself from Lady Patrick, and John Henry and Ripsie, in their long years together are always separated by Borowis

Loneliness can be good. Mrs Quin learns that in the long companionship of the years after Tracy goes, when she and Cecily are alone in the house; companionship of rooms and stairs, of windows and colours; in the gentle ticking away of the hours, the swinging pendulum of the grandfather clock. ‘I was happy,’ Mrs Quin could have said. Contented loneliness is rich because it takes the imprint of each thing it sees and hears and tastes”

This for me was the central theme of China Court: the value of everyday domesticity. The characters who recognise it are fulfilled and live rich lives that outwardly appear narrow but in reality connect with something fundamental that enables a wider kinship with others.

The portraits of the individuals run seamlessly and as the novel progresses they weave together for a complex depiction of family, and how histories are cyclical, building on what has gone before.

Mrs Quin is an avid gardener, and as in Kingfishers…there are beautiful descriptions of the natural world, but also of food and the various meals the family have taken together over the years.

“Now Cecily brought in saffron cake, buttered scones hot in a silver dish, brown bread and butter thin as wafers, quince jelly and strawberry jam from China Court quinces and strawberries; she had made shortbread, fruitcake and because Tracy likes them as a child, thin rolled ginger-snaps filled with cream.”

Gradually the family histories build towards a brilliant denouement in the present day of the novel. It’s dramatic but believable and once again I found myself racing towards the end. And the end is where I encountered my first reservation about Godden’s writing. To discuss it I’ll have to include a SPOILER so skip to the end of this paragraph if you don’t want to know. Here it is: an act of domestic violence takes place, an act which is quickly forgiven and leads to sex. I think it’s a dramatic device to shock a couple who aren’t communicating well (a recurring theme in the novel) towards honesty and resolution, but reading this almost 60 years after it was written, times have changed and it was just horrible. I know from films of the time that slaps and spankings were freely given, but I’d be very surprised if this worked for modern readers.

This one incident aside, China Court is a wonderful portrait of a house and a family, beautifully evoked and fully realised with fondness but without sentimentality.

“ ‘We were truly kin,’ says Mrs Quin, and it is true that Tracy is like her grandmother in many ways; for instance, both, from the moment they first see it, are enslaved by China Court.”

To end, regular readers will know there are no depths to which I won’t sink in order to shoehorn in an 80s pop video. So please pardon the pun that has enabled my childhood hair icons to be this week’s choice:

29 thoughts on ““I loved Mr. Darcy far more than any of my own husbands.” (Rumer Godden)”