Last year as part of NADIM I looked at Two Pints by Roddy Doyle, so I thought this year I’d look the sequel. Like its predecessor, it is written entirely as dialogue between two friends meeting for the titular drinks, and set on specific dates, this time between September 2012 and June 2014. Once again, a warning for swearing – well, it is Roddy Doyle after all 😀

The issues in this period, lest we forget, include the financial crisis, horsemeat in burgers, elections of the new Pope and the deaths of various celebrities. All this occurs alongside family events and disagreements over football.

– He’s just copying the other fella.

– Wha’ the fuck are yeh talkin’ about?

The humour doesn’t detract from the realities though.

– My young one is in trouble. An’ her fella.

I was disappointed not to hear more about Damien, the grandson from Two Pints who was fracking in the back garden with a magimix, but I think at such a turbulent time, Doyle chose to focus very much on current affairs. The dialogue still felt entirely authentic though, and never heavy-handed.

The conversation is wide-ranging, and even poetry gets a mention, despite the short shrift it was given in Two Pints:

– Did yeh ever meet him?

– Don’t be fuckin’ thick. Where would I have met Seamus Heaney?

– That’s the thing, but. He looked like someone yeh’d know.

– Except for the fuckin’ poetry.

– Wha’ would possess a man like tha’ to throw his life away on poetry?

– Although fair enough – he won the Nobel Prize for it.

– He’d probably have won it annyway.

– I don’t know. Football, plumbin’ – annythin’. Tha’ was what was special about him.

Another affectionate portrait of the people of Dublin, and Ireland at a particular moment in time. 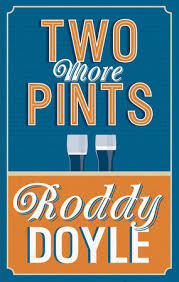