Back in January when I wasn’t sure I’d manage NADIM this year (I’m still not sure – 9 posts to go!) I did a week of novellas by Colette. I loved immersing myself in her writing that week so I couldn’t resist including another of her novellas this month.

The Cat is familiar Colette territory: a young, slightly feckless couple failing to communicate. The difference is that there are three beings in this marriage: Alain, Camille, and Alain’s Russian Blue cat Saha. 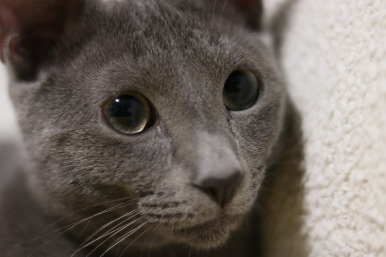 “Alain listened to her, not bored, but not indulgent either. He had known her for several years and classified her as a typical modern girl. He knew the way she drove a car, a little to fast and a little too well; her eye alert and her scarlet mouth always ready to swear violently at a taxi driver. He knew that she lied unblushingly”

They desire one another but they don’t communicate in any meaningful way. Alain almost seems to despise Camille at times – finding her tacky and invasive – unlike his pedigree cat, whom he adores. The three of them move temporarily to a friend’s flat while their home is being refurbished:

“He was incessantly and increasingly aware of his repugnance at the idea of making a place for this young woman, this outsider, in his own home. He nursed this resentment and fed it with secret soliloquies and the sullen contemplation of their new dwelling.”

For Camille, the resentments and disappointments which begin to build in their marriage become focussed towards Saha. As she points out, it is worse than another woman. Saha isn’t a competitor, but Alain loves her unconditionally and has an easy sensual relationship with his cat, whereas his sexual relationship with Camille is complicated by his feelings of contempt.

“As soon as he turned out the light, the cat began to trample delicately on her friend’s chest. Each time she pressed down her feet, one single claw pierced the silk of the pyjamas, catching the skin just enough for Alain to feel an uneasy pleasure.”

Spoiler alert: I must admit I did what I never do and skipped to the end of this story before reading very far, to check the cat wasn’t killed. I couldn’t face a story where that happened. But thankfully Colette is more subtle than that. Saha doesn’t die, which means the failures in the human relationship occur not in the rage of grief, but in something more subdued and sadder. Saha is a focus for the confused, antagonistic feelings the young couple have for one another. The cat brings these feelings to the surface more quickly than perhaps they would have done without her, but there is no doubt they would have occurred at some point.

You don’t need to be a cat lover to enjoy this story. It is a study of a young, naïve, selfish couple and the unthinking damage they do to one another, while professing their love. This being Colette, alongside the psychological insights, there are beautiful descriptions of the natural world:

“High in the sky a hazy moon held court, looking larger than usual through the mist of the first warm days. A single tree – a poplar with newly opened glossy leaves – caught the moonlight and trickled with as many sparkles as a waterfall. A silver shadow leapt out of a clump of bushes and glided like a fish against Alain’s ankles.

‘Ah! There you are Saha! I was looking for you. Why didn’t you appear at table tonight?’”

To end, here’s the lady herself with a couple of her beloved pets: