This is my contribution to the third Persephone Readathon, hosted by Jessie at Dwell in Possibility. 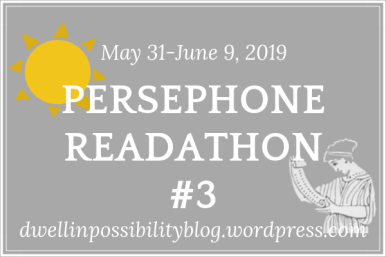 It became apparent very quickly this year that my 2018 book buying ban would have no discernible impact at all if I didn’t rein it in again. So although not officially on a ban, I hadn’t bought any books since March and I’m trying to get that TBR stack down a bit further. This post covers the last two Persephones I had left in the pile… please note the use of past tense there. Those of you who follow me on twitter will know this happened a few hours ago: 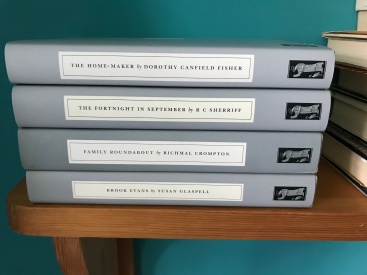 I live opposite the greatest charity bookshop ever – what am I supposed to do? Two still had the bookmarks! I left 3 more Persephones behind in there (OK, so I already had those, but still…  😉 )

Firstly, Miss Buncle’s Book by DE Stevenson (1934), which is Persephone No.81. This simple story was an absolute joy. Unassuming spinster Barbara Buncle is desperate for money after her dividends stop paying out due to the financial crash. She decides to write a novel, and as she frequently asserts she has no imagination, she bases it on her village and the people she knows.

The novel is a smash hit, and the villagers are furious, apart from the doctor and his wife:

“I confess it amused me, Ellen – I know this is heresy in Silverstream, but it amused me immensely. It didn’t strike me as satire, nor could I find anything nasty in it. You can read it both ways… I’m pretty certain that its just a simple story, written by a very innocent person – a person totally ignorant of the world and worldly matters – perhaps even rather a stupid person.”

He’s only part right. Barbara Buncle has no side to her, so those who read the novel, Disturber of the Peace, as a satire are wrong. But she is not stupid. She is clear-sighted and that is what has enabled her to make such piercing portraits of her neighbours. The socially pretentious local bully Mrs Featherstone Hogg is determined to root out whoever has written about her in such unflattering (honest) terms:

“Once they knew who it was they could decide what was to be done, everything depended on who the man was. Whether it was the sort of man who could be terrorised, ostracised, or horse-whipped. At the very least he could be made to apologise and hounded out of Silverstream.”

Yet for all their objections, the villagers start to blur the lines between fact and fiction even further. A romance invented by Barbara develops in real life, and a deception she thought she invented turns out to be right on the money.

Barbara remains humble and somewhat bemused by it all. She is a sweet, endearing heroine but not overly saccharine. She has a strong practical streak and this is what led her to write in the first place and write so honestly.

“It represented food and drink to Barbara Buncle, and, perhaps, a new winter coat and hat; but above all, freedom from that awful nightmare of worry, and sleep, and a quiet mind.”

Miss Buncle’s Book is charming. The portraits of the villagers are colourful but not silly, the plot is escapist but not ridiculous. A perfect antidote to our troubled times. 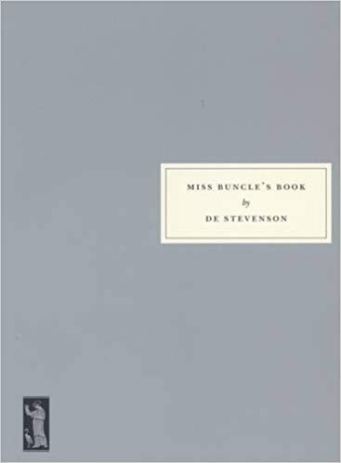 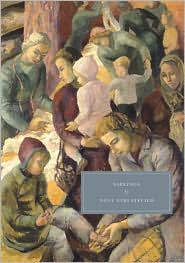 Secondly, Saplings by Noel Streatfeild (1945), which is Persephone No.16 and wasn’t remotely escapist. It charts the disintegration of a family during the Second World War. A clever stroke by Streatfeild is that the Wiltshire family has every privilege: they are well off, able to send their children to family members rather than generally evacuate, they can buy houses away from the city and the father isn’t called up to military service. Yet still the conflict wreaks havoc on both the adults and their four children.

I don’t know if it was because I read all of Streatfeild’s children’s books when I was young and her voice somehow set off a distant echo with me, but I loved this from the start. The opening scene sees parents Alex and Lena with their four young children, Tony, Laurel, Kim and Tuesday, at the beach. This being an interwar middle-class family, they also have a nanny and governess with them. Just as well, because Lena is not remotely maternal. She believes a mother’s role is to look lovely and be charming, and her children will never be her priority.

“He wanted to be a family man, bless him. The children were darlings, but she was not a family woman, she was utterly wife, and if it came to that, mistress too, and she meant to go on being just those things. It didn’t matter giving into him occasionally, letting him be all father. When they were alone she would brush all that away and have him where she wanted him.”

I found the frank discussion of Lena’s sexuality surprising for a novel of the period, and Streatfeild doesn’t judge her harshly because of it, but shows rather how this private need of Lena’s unfortunately has far-reaching consequences. The pressures of war will drive everyone close to breaking, and Lena’s focus on her own needs is disastrous for her children. However, I don’t want to say too much about plot because it’s very easy to give spoilers, and the joy of Saplings is seeing the subtle portraits of the four children emerge.

“Laurel had been crying. Her cheeks had a stiff shiny look. Alex’s heart was wrung. He wanted to sit down by her and tell her how gloomy the house would be without her. That of all his children she had more tentacles round his heart. That he detested packing her off to a boarding school. That every night he would look for her funny plain little face and brisk plaits and would mind afresh because they were not there. But he had never spoken to her like that and tonight, poor scrap, was not the night to start. One word might start her crying again.”

Laurel and Tony probably suffer most. They are the eldest two and in very different ways the things left unsaid by adults effects them both profoundly. Streatfeild is expert in portraying children’s points of view without ever being patronising or sentimental and we see how the unthinking actions of adults are taken as grave injustices by the children. This could have so easily gone wrong: Saplings portrayal of the impact of war on children could have been mawkish and sickly-sweet. But actually it is even funny at times: Kim is a self-dramatising and demanding presence, and Streatfeild shows how he is charming but also, like his mother, entirely self-focussed and constantly playing to audiences.

“Kim thought of chalk blue butterflies. He raised his eyes to the ceiling. He looked like a Hollywood choirboy rounding off a film in which the her or heroine’s soul in the in the last reel flies heavenwards.”

Saplings is expertly written and I really felt I was alongside the four children, immersed in their world. It shows the waste of war for everyone, adults and children alike. What is particularly devastating though, is the suggestion that the adults are in a better position to recover than the children. The war will end, but you only have one childhood, and for Tony, Laurel, Kim and Tuesday theirs has been torn to shreds by warfare, and by adults who systematically fail to recognise what the children need and offer them sanctuary.

“To keep homes safe was basically what most men were fighting for. Lena and Alex’s home was just the sort of set-up he himself was fighting to keep. Beautiful, orderly, full of children.”

Last year when I took part in the Persephone readathon I ended on Visage’s Fade to Grey in honour of those covers. Frankly, I think I outdid myself. This time, try as I might. I couldn’t think of an 80s classic to shoehorn in, so instead here’s a mention of Noel Streatfeild in a Hollywood blockbuster. You’ve Got Mail has always baffled me: why would you get together with the corporate capitalist pig who destroyed your family business and has lied to you almost constantly? Anyway, this is a nice mention of Streatfeild’s children’s books (2.18-3.10) and then I recommend watching The Shop Around the Corner which You’ve Got Mail is based on, but unlike the remake, is utterly charming.