Unusually, just one book from me this week, because it’s a looooooong post, about a reading choice inspired by this post from Ali.

I don’t really watch dating shows, but when I catch a bit of them, I can feel nicely smug listening to people who have tick box criteria for potential mates. It leads me to a tick box list of my own:

So of course, the same applies to the love of my life, books. My tick boxes:

I’m never going to find that novel am I? Or if I do, for some indefinable reason it’s not going to work for me…

I loved, loved, loved South Riding by Winifred Holtby (1936). I loved it so much. It was one of those gorgeous bookish situations where you’re racing through it because you can’t bear not to be reading it, but you also don’t want it to end. I’m kind of angry that I’m not reading it at this very moment… 😀 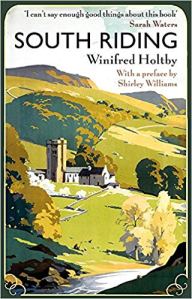 Sarah Burton, worldly and travelled, returns to her home of South Riding in Yorkshire to take up the position of Headmistress in the local girls school:

“This was her battlefield. Like a commander inspecting a territory before planning a campaign, she surveyed the bare level plain of South Riding. Sarah believed in action. She believed in fighting. She had unlimited confidence in the power of human intelligence and will to achieve order, happiness, health and wisdom. It was her business to equip the young women entrusted to her by the still inadequately enlightened State for their part in that achievement. She wished to prepare their minds, to train their bodies, to inoculate their spirits with some of her own courage, optimism and unstaled delight.”

Her position will bring her into contact with the local council as she tries to get the school up to scratch. Alderman Joe Astell, somewhat incapacitated by TB, will become a friend:

“He had become a Socialist through love of his fellow men, not through dislike of them, and now he felt an emotional barrier between himself and his neighbours which no logic could remove. He saw himself, an awkward priggish man, with a harsh voice and tactless manner, tolerated simply because illness had reduced his fighting powers, weakened his quality.”

Both he and Sarah feel an antipathy towards the local landowner, Robert Carne of Maythorpe. Carne is in debt up to his eyes, trying to keep his estate running and finance his wife’s exorbitant private mental health hospital bills. His daughter Midge – who may not be his biologically – seems to have inherited her mother’s vulnerability. Carne has a weak heart and is not sure how long he will live. It says something for the complex characterisation of him that as a reader I still felt for him, despite his admission that he raped his wife – the only time that Midge could have been conceived by him.

“He was Robert, elder son of Thomas Carne, steward for one generation of two thousand acres. He felt humble because he knew himself to be an unworthy steward.

He had endangered the farm for his wife’s sake. The shadow of her thin imperious beauty crossed that hot firelit room where rested the two old men who had served Maythorpe better than its owner.”

When Sarah sees him and thinks this:

“I dislike, I oppose everything he stands for, she told herself – feudalism, patronage, chivalry, exploitation…We are natural and inevitable enemies.”

There are no prizes for guessing what happens…

The plot of the novel is centred around local politics and how the decisions taken have a wide- reaching ripple effect. But although Holtby has plenty to say about the state of society and the responsibilities of those in power, what carries the novel are the people behind the positions, the committees and the decisions. She effortlessly weaves together the lives of this disparate group who happen to all live in the same town in the north of England.

A piece of wonderful characterisation is that of Alderman Snaith. He is not a major character although he has a significant part to play, and in a lesser writer’s hands this borderline-corrupt, self-serving aesthete who despises Spring for its fecundity could be out-and-out repulsive. Yet in a wonderful chapter titled Alderman Snaith is Very Fond of Cats he is shown to be damaged in the most horrific way and subsequently a complex man.

But far and away the best characterisation is Mrs Beddows, supposedly based on the author’s mother. She is the first female alderman of the district, in her seventies and age shall not wither her:

“So cheerful, so lively, so frank was the intelligence which beamed benevolently from her bright spaniel-coloured eyes, that sometimes she looked as young as the girl she still, in her secret dreams, felt herself to be. Her clothes were a compromise between her spiritual and chronological ages. She wore today a dignified and beautifully designed black gown of heavy dull material; but she had crowned this by a velvet toque plastered with purple pansies.”

Mrs Beddows adores Carne, is a good friend and advisor to Sarah, and endures her tight-fisted husband as best she can:

“The one commodity with which he was prepared to be completely generous was his unasked opinion.”

There’s plenty here about the position of women too; presented not only through Sarah’s relentless pursuit of opportunities and education for her pupils, but in light-hearted ways such as through the contents of Mrs Beddows gift drawer:

“The indictment of a social system lay in those drawers if they but knew it – a system which overworks eight-tenths of its female population, and gives the remaining two-tenths so little to do that it must clutter the world with useless objects. Mrs Beddows did not see it quite like that; presents were presents; bazaars were bazaars, and Sybil was teaching the Women’s Institute raffia work and glove-making.”

South Riding is a rich, passionate novel, full of ideas and peopled with idiosyncratic, believable characters. It’s immediately become one of my all-time favourite books.

The BBC adapted South Riding in 2011. I watched it but I can’t remember much about it, so it obviously didn’t captivate me as much as the book. I’m going to re-watch it and looking at the trailer now I do think Anna Maxwell Martin is excellent casting for Sarah Burton:

32 thoughts on ““I advise nobody to drown sorrow in cocoa.” (Winifred Holtby)”