Hello lovely bookish blogosphere and a very Happy New Year to you all! May 2020 bring you lots of reading joy.

I disappeared from the interwebs for the last few months of 2019 because pesky real life got in the way. Work was hectic and I had renovations going on in my tiny flat which although minimal, still somehow involved turning my home into a dusty, dirty assault course for weeks on end and all my books piled up in boxes. Definitely #FirstWorldProblems and I’m not complaining, but it did put paid to my blogging, and catching up with all your blogs.

Now my books are back on brand new shelves (grand total of sacks cleared out to the charity shop: 22! Effect on my bookshelves: none whatsoever!) and my computer isn’t under a layer of filth I’m looking forward to posting again and reading all your wonderful words.

While all this was going on I found it hard to read anything too demanding or stressful. This was not the time for reality, especially with the election being part of that reality ☹ I needed escapism. I needed rescuing. And rescued I was, by a woman who died in 1961. 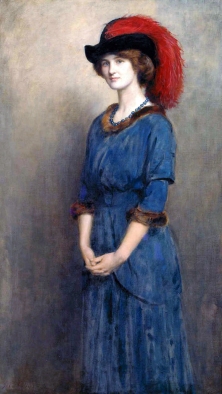 Angela Thirkell was born into privileged circumstances (as can be guessed from the portrait) and was connected to lots of famous types including pre-Raphaelite painters, Kipling, JM Barrie and Prime Minister Stanley Baldwin. Her life wasn’t all roses though, and I think her novels set in Trollope’s  fictional Barsetshire are fully intended to be a pleasant distraction rather than any attempt at portraying reality.

In High Rising (1933) widowed writer Laura Morland arrives in the titular village with her brattish son Tony to spend Christmas (they have a London flat for the rest of the year, obvs). What immediately won me over was that Tony was an immensely irritating child and at no point are readers supposed to find him sweet or endearing:

“Laura wondered, as she had often wondered with the three older boys, why one’s offspring are under some kind of compulsion to alienate one’s affections at first sight by their conceit, egoism, and appalling self-satisfaction […] He returned from school rather more self-centred than before, talking even more, and, if possible, less interestingly. Why the other boys hadn’t killed him, his doting mother couldn’t conceive.”

Tony is awful, but he’s not a bully or spiteful, and he is unintentionally funny. There’s no sentimentality here about motherhood, or widowhood, as the dear departed is described thus:

The death of Laura’s husband meant she had to earn a living and she decided to do so by writing sensation novels:

“I thought if I could write some rather good bad books, it would help with the boys’ education.’

‘Yes. Not very good books, you know, but good of a second-rate kind.”

I know Angela Thirkell didn’t rate her own writing, so it’s hard not to see that as an autobiographical touch, but I think High Rising is a bit better than that. It’s a funny, warm and affectionate portrayal of the village inhabitants and plotted with the lightest of touches.

Laura has a friend, fellow writer George Knox, who lives in Low Rising with his daughter Sibyl. He has a new secretary, Miss Grey, who is viewed with suspicion by all. More suspicious to me was the fact that George was published, because if he wrote anything like he spoke he’d be absolutely unreadable:

“ ‘My dear, dear Laura,’ he cried, sweeping her into a vast embrace, ‘this is divine. I must kiss you, on both sides of your face, owing to my French blood. I was half asleep upstairs, desiccated in mind, ageing in body, and now you are here and everything lives again.”

Can Laura rescue George, foil Miss Grey, find Sibyl a husband and stop Tony from falling on the railway tracks? What do you think? 😉 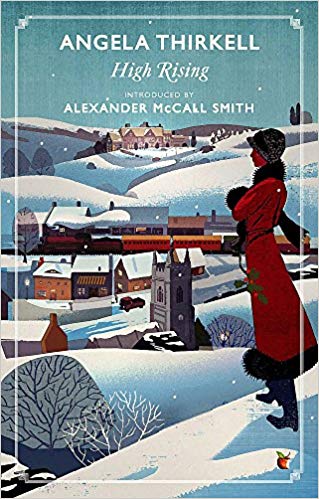 Secondly Wild Strawberries (1934) which was given to me by Sarah from Hard Book Habit, who sadly don’t seem to be blogging anymore and are much missed for their funny and insightful reviews – fingers crossed for their return.

I didn’t enjoy this quite as much as High Rising, but I did still find it diverting at a time when I really couldn’t manage anything heavier. Matriarch Lady Emily Leslie is absent-minded in the extreme, causing mild-mannered chaos and disarray wherever she goes.

“At her daughter Agnes’ wedding to Colonel Graham she had for once been on time, but her attempts to rearrange the bridesmaids during the actual ceremony and her insistence on leaving her pew to provide the bridegroom’s mother with an unwanted hymn book had been a spectacular part of the wedding.”

Agnes is now mother to a brood of young children and thank goodness she has nannies and maids because she is flaky in the extreme:

“She now lived in a state of perfectly contented subjection to her adoring husband and children. Her intelligence was bounded by her house and her exquisite needlework, and to any further demands made by life she always murmured ‘I shall ask Robert.’”

The Leslie family live in a country pile “its only outward merit was that it might have been worse than it was” where all the children arrive for the summer – kind John, rakish David, their nephew Martin, a callow youth of 17 who will inherit; and Agnes’ niece Mary who is 23 and enjoying a country summer with relations she hasn’t met.

There is no real plot, except a vague momentum towards Martin’s birthday party. The romantic focus comes from Mary falling for David, who is entirely unsuitable, while a more suitable match remains seemingly out of reach… This is not a novel of subtle characterisation, or complex unpredictable plots. In other words, it was just what I needed and I do recommend it for when you find yourself in a similar predicament.

In recent years, as the overprivileged classes in my country seem so intent on bringing us to ruin with a total disregard of anyone who gets in the way of their acquisition of power, I’ve found it hard to stomach my usual comic reads of Wodehouse and Mitford. I still like both those authors, but I just can’t laugh at daft toffs right now, when they’re so dangerous. I think the reason I could still enjoy Thirkell was that her characters are a bit more concerned with reality, such as the need to earn money (for some of them), and she asks us to laugh primarily at human foibles, who happen to be portrayed amongst the upper classes in this instance, but are by no means exclusive.

However, I should include the warning that there are some repugnant racist views and language expressed in both books which, although short-lived, are really horrible.

To end, I’m starting the year as I mean to go on, with rubbish 80s pop videos. Usually there’s a highly tenuous link to the post and I was going to go with Strawberry Switchblade, but I recently discovered the shocking news that my mother has no memory of this duet, so this is for her. I can only assume Gene had the better agent, because he gets chauffeured about in a snazzy tie and cummerbund combo, while Marc has to hang around by the bins:

26 thoughts on ““There are few pleasures like really burrowing one’s nose into sweet peas.” (Angela Thirkell)”