The Loved One was written following Waugh’s experience of visiting Hollywood to discuss an adaptation of Brideshead Revisited. In the novella he satirises Hollywood and how death has become a business. It’s a pretty brutal attack, particularly towards the end.

It begins with a portrait of two ageing Hollywood tycoons, Sir Ambrose Abercrombie:

“He was still on what Lady Abercrombie fatuously called the ‘right’ side of sixty, but having for many years painfully feigned youth, he now aspired to the honours of age. It was his latest quite vain wish that people should say of him: ‘Grand old boy.’”

And Sir Francis Hinsley: “His swimming-pool which had once flashed like an aquarium with the limbs of long-departed beauties was empty now and cracked and overgrown with weed.”

Dennis Barlow, a poet who was fired from a story of Shelley’s life and now works at Happier Hunting Ground pet funeral service, lives with Sir Francis. Dennis enjoys his work:

But Sir Ambrose feels it reflects badly on the ex-pat community. When Sir Francis kills himself, no-one is particularly upset. Dennis finds discovering the body “rude and momentarily unnerving”, but it brings him into contact with Whispering Glades funeral home and fragrant cosmetician Aimee Thanatogenos.

I thought this was the strongest part of the novel, as Waugh turns his satirical eye to the façade and sentimentality that can accompany the business of death. I particularly liked the question of how Sir Francis should look in his coffin:

“ ‘shall I put him down as serene and philosophical or judicial and determined?’”

Dennis starts courting Aimee, and she find herself torn between him and the inappropriately named Mr Joyboy, the senior mortician who is something of a celebrity in his place of work:

“As he passed among them, like an art master among his students, with a word of correction here or commendation there, sometimes laying his gentle hand on a living shoulder or a dead haunch, he was a figure of romance, a cult shared by all in common, not a prize to be appropriated by any one of them”

How the relationships play out in The Loved One is particularly vicious. Waugh is scathing about the cruel disregard human beings can demonstrate towards one another and what this means for individuals and for society as a whole. The title of this novella is bitterly ironic. 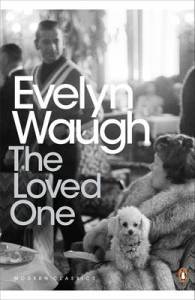