How depressing is it that Orwell not only hasn’t aged at all, but seems more pertinent than ever? Let’s distract ourselves from the dystopian nightmare we’re living with a few books… here is my contribution to the 1944 Club, hosted by Kaggsy at Kaggsy’s Bookish Ramblings and Simon at Stuck in a Book. Do join in! 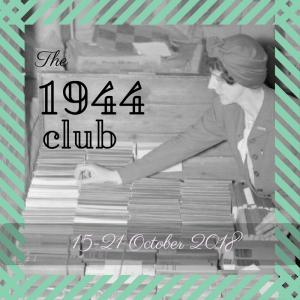 Firstly, The Ballad and the Source by Rosamond Lehmann. Told from the point of view of 10-year old Rebecca in the years just before World War I, it is the story of a captivating older woman, Sibyl Jardine and her extraordinary family. Sibyl was friends with Rebecca’s grandmother, and invites Rebecca and her siblings to pick primroses on her property. Rebecca is entranced by the charismatic Mrs Jardine from the start:

“It sounded strange to us that a person should so reveal her feelings: we did not say things like that in our family, though I dreamed of a life where such pregnant statements should lead on to drama and revelation.”

But Mrs Jardine’s magnetic nature comes at a price. People are manipulated by her, dominated by her, and subdued by her:

“Now that Mrs Jardine had gone, the electrifying meaning with which her presence always charged the air began to dissolve. The arrows of her words fell harmlessly out of the copper beech on to the grass around us, and we kicked them aside and drew together, an ordinary group of children going for a picnic.”

Yet because it is told from the point of view of a child, we never quite get to the core of Sibyl Jardine. She remains enigmatic, always slipping out of reach:

“Mrs Jardine, pausing at the end of the herbaceous border, mused. For the first time in her actual presence the sense pierced me directly: that she was wicked. A split second’s surmise. But when next moment I looked up at her, there was her profile lifted beautifully above me, serene and reassuring as a symbol in stone.”

The Ballad and the Source is an odd novel. The child’s point of view is not child-like; the events of Mrs Jardine’s life are melodramatic to say the least (abandoned children, incest, mental illness) and much of the novel is reported speech as Mrs Jardine and her maid Tilly tell Rebecca the life story which is wholly unsuited to a child’s understanding. It has also dated: regional accents sound stereotyped and the portrayal of mental illness is clumsy.

Yet the novel is beautifully written and highly readable. It demonstrates the high price paid by women for emancipation when they have no power. Ultimately what propelled me through the novel was the character of Sibyl Jardine. Like Rebecca, I found her complex and compelling, and I couldn’t wait to see where this intriguing woman took me next.

Secondly, The Friendly Young Ladies by Mary Renault. Set between the wars, it follows seventeen-year-old Elsie Lane as she leaves her Cornwall home to find her older sister Leo. Elsie’s parents are in a deeply toxic marriage and Elsie escapes into fantasy, trying to make herself invisible. As a result she is immature and naïve:

“She was a dim, unobtrusive girl. One might conjecture that she had been afraid to grow up, lest the change should attract attention to her […] The fact that she went nowhere, met nobody but her mother’s friends, and lived in a world of her own imagination had suspended her in the most awkward stage of adolescence for quite three superfluous years.”

It is a visit from locum doctor Peter which spurs her into action. His half-baked ideas about psychology means he seduces timid female patients to cheer them up, not noticing the heartbreak and disappointment he causes when he fails to follow thorough on the fantasies he has encouraged. He is not cruel or vindictive, but he is vain and self-centred:

“His dislike of hurting anyone was entirely genuine, as traits which people use for effect often are; and from this it followed that if anyone insisted on being hurt by him, he found the injury hard to forgive.”

Elsie thinks the drama of running away will bring her and Peter together. When she finds Leo, her sister is dressing boyishly, writing Westerns and living on a houseboat on the Thames outside London, with the lovely Helen. To the reader it is entirely obvious how Leo is living her life but Elsie never realises what her sister’s sexuality is. The Friendly Young Ladies is quite progressive in its portrayal of how sexuality is not fixed, and how being gay is not a source of torture and self-loathing (it was written as an antidote to The Well of Loneliness):

“Her way of life had always seemed to her natural and uncomplex, and obvious one, since there were too many women, for the more fortunate of the surplus to rearrange themselves; to invest it with drama or pathos would have been in her mind a sentimentality and a kind of cowardice.”

(Interestingly, my Virago edition, published in 1984, still referred to Mary Renault as emigrating to South Africa ‘with her close friend Julie Mullard’. I wouldn’t have expected such coy obfuscation from a progressive late-twentieth century publisher.)

Peter ends up visiting the houseboat and trying to seduce both Leo and Helen. He knows they are in a relationship, but his vanity knows no bounds:

“Eccentricity in women always boiled down to the same thing. She wanted a man.”

What ensues is a comedy but one that contains sadness and hurt. The delicate balance of relationships in the houseboat is upset and changed irrevocably by Elsie’s naïve blundering and Peter’s vain manipulations.

I really enjoyed The Friendly Young Ladies. Elsie and Peter are both infuriating, but also funny and fondly drawn. The relationships between the four and the neighbour Joe are shown as complex and subject as much to what is not said as what is voiced. The character studies are carefully drawn and wholly believable.

My edition of this novel included an Afterword by Mary Renault in which she observes:

“on re-reading this forty-year-old novel for the first time in about twenty years, what struck me most was the silliness of the ending.”

So, not a flawless novel, but very much a readable one.

To end, 1944 was the year my mother was born. It was a home birth (no NHS!) and my grandmother heard this song being whistled in the street outside the window. Mum’s a big Johnny Cash fan so this is the version I’ve plumped for:

26 thoughts on ““Don’t let people know the facts about the political and economic situation; divert their attention to giant pandas, channel swimmers, royal weddings and other soothing topics.” (George Orwell, I Have Tried to Tell the Truth: 1943-1944)”