The final post of Novella a Day in May! It’s time for dancing Brad:

No-one is more surprised than me to be here. I never thought I’d manage to post every day for a month. Massive thanks to everyone who has read, liked, commented and shared these posts, you are all fab! I never expected people to read this blog on such a regular basis.

I’ve really enjoyed my month of novellas and I hope I’ve managed to spread some novella love along the way.

I’ve never done a summary post before but then I’ve never posted every day for 31 days before, so here’s an attempt to squeeze all those novellas into a few stats before I go on to my final choice for the month.

The gender split in authors was fairly even: 15 female authors and 16 male. Pointless pie chart time: 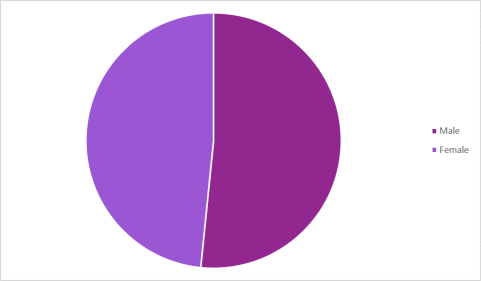 The shortest novella was Journey into the Past at 84 pages and the longest was After Claude at 206, because I cheated my own criteria by 6 pages. The average number of pages of the novellas was 142. None of them were actually this long, which goes to show there’s no such thing as average 🙂

It was a good opportunity to read some of my favourite publishers: I read 9 by Virago, 5 by Pushkin Press, and 2 by Peirene, as well as novellas published by AndOtherStories, and New York Review of Books.

I visited 13 countries including France 3 times (4 times if I count Jean Rhys) and Denmark twice. Two countries were new stops on my Around the World in 80 Books Reading challenge, hosted by Hard Book Habit: Libya and Kyrgystan. Thirteen novellas were in translation and the rest were by English, Irish and American authors. The southern hemisphere was sadly neglected, but this does give me a reason to justify even more novella reading 😉

And now the bit I found hardest: trying to pick out favourites. I planned to try and pick out a top 5 but it’s proved impossible. However, special mention has to go to William Maxwell, who I wrote about yesterday. I thought They Came Like Swallows was a work of restrained beauty. He had a perfect understanding of the novella and used sparse words to convey a story at its absolute essence. Not a word was wasted and no further words were needed. It’s made me keen to hunt down the rest of his work.

And now, onto my final choice! A novella that the blogosphere told me was great last year and then I forgot about until Susan’s post reminded me of the paperback release, so off to the library I went…

Sonja is single, in her 40s, a translator of thrillers she finds gruesome and misogynistic. She is trying to build bridges with her distant sister, manage her massage therapist’s more esoteric suggestions, and learn to drive.

Sonja’s driving instructor Jytte screams instructions at her and won’t let her change gear, so she goes to see Folke, the head of the school,

“Sonja’s on the verge of tears. It happens unexpectedly; the sob sits in her throat and wants to come out. Folke’s hands move efficiently from side to side across the desk, and she longs to grasp one of them. Squeeze it, say ‘Thank you,’ from the heart. It doesn’t escape Sonja’s notice that she gets red in the face, because this sort of thing rarely happens. It almost never happens anymore – that someone wishes Sonja the best. She’s used to dealing with everything herself, and she’s reasonably good at it too.”

This captures much about Mirror, Shoulder, Signal: Sonja is muddling through life and doing it more or less competently, but she feels awkward and displaced. She’s from Jutland (Folke observes “All the Jutlander’s I’ve met are a bit quirky” and a Danish friend tells me this is a common stereotype ) but has lived in Copenhagen for years, long enough to not feel at home in either the countryside or the city. She’s doing OK but she could be doing better, struggling with “the things she cannot find the language to say and the people she most wants to say them to.”

Sonja’s a strong character and immensely likeable with all her idiosyncrasies. She goes her own way and always has, but reflects that this may cause more harm than good:

“Mom did me a disservice believing I could just be myself. If I hadn’t been allowed to, then I’d be sitting right now with the whole package, but that train’s left the station. And if anyone does, Mom should know that you have to adapt if you’re going to entangle yourself in an intimate relationship. Kate knows that too. And Dad.”

There’s plenty of humour in Mirror, Shoulder, Signal. Not only at Sonja’s slightly blundering way through life, but also at the madness of Jytte screaming out her driving lessons; the awkwardness between Sonja and Folke; the flaky assertions of Ellen, the masseuse. But it’s not a whimsical novel and much of the humour is pretty sharp:

“while Sonja does miss her sister, at the same time it ignites in her a yearning for fire”

I really enjoyed the short time I spent with Sonja. Nothing much happens, as in much of life, but there is a believable character arc for Sonja whereby things remain unresolved but improving – a happyish, unsentimental ending which made me smile.

To end, normal service will now be resumed on this blog: intermittent, unnecessarily verbose posts on two books linked by a theme, most likely with a cheesy late 20th century pop song shoehorned in. Here’s one such video to ease us in, chosen in honour of the fact that while Novella a Day in May is now over, I’ve enjoyed it so much I’m wondering if I’ve got it in me to do it again next year… what better way to express this than through song, while dressed in a flared satin and spangles jumpsuit twinset? Take it away, Gloria…